The Maxim Gorky Theatre in Berlin wants to make a „hero of the Hitler era“, who murdered thousands of Jews, Poles, Russians, Ukrainians and other people, palatable to the population with hip hop. The background is that the protagonist of the play „BANDERA“ is revered as a hero in the prevailing political climate of today’s Ukraine and fascists have been part of politics and society there since the Maidan coup in 2014. The veneration of the murdering Hitler collaborator Bandera also belongs to the current „pro-Western“ Ukrainian state propaganda. That’s why he obviously has to be washed clean, at least in part, in the West.

Part of Hitler’s system of rule was to install fascist governors from among the resident population in the occupied territories. One of them was the convinced anti-Semite Stephan Bandera, who murdered tens of thousands of Jews and other people with his Ukrainian Nazi organization OUN, among others, and later also committed numerous massacres with the UPA, among them thousands of „collaborators“ (with the opponents of the Nazis or later of the West, because the latter appointed Bandera as terrorist leader against the Soviet Union after the end of the war).

The Maxim-Gorki-Theater zu Berlin has – since December 2017 – a „HipHopera“ with the title „BANDERA“ in its program (1). On the Bandera event page of the established Berlin theatre to the play officially sponsored by the Berlin Cultural Senate under the notoriously propagandistically active senator Klaus Lederer (Die Linke, NATO-Flügel) it says, very true to the line with reference to the „bad Russians“, as it is now again not only in Angela Merkel’s Germany „in“ (2-14):

„Who was Stepan Bandera? Everyone in Ukraine knows his name. In the Russian-Ukrainian war the myth about the partisan leader is revived – by both sides. While Russian television portrays him as a kind of Ukrainian Hitler, in Ukraine he is celebrated as a national hero and depicted on stamps. Yuriy Gurzhy and Marina Frenk show the results of their research in the form of a HipHopera.

The soundtrack to Bandera was released as a digital album on Balkan Beats Records in April 2018.

The series „Myths of Reality“ is funded by the Senate Department for Culture and Europe.“

The announcement of the play is already overflowing with current Ukrainian fascist propaganda: Allegedly there is just a Russian-Ukrainian war in Ukraine. A plain lie, even if our propaganda media claim this again and again. An attack by Nazi gangs and Ukrainian military against the Russian-speaking population in the east of the country is, of course, very real. The Sunday newspaper from Switzerland (17):

„Neo-Nazis are raging in the east of Ukraine. Right-wing extremist fighters of the Ukrainian volunteer militia plunder apartments, torture imprisoned separatists and kidnap media workers. Terror in the name of the Maidan revolution. Amnesty International accuses the government-loyal gangs of serious human rights violations – they are also supported by Switzerland. Research shows: Neo-Nazis from the cantons of Geneva, Vaud, Wallis and St. Gallen maintain close contacts with the fighting extremists and deliver money and aid material to the front.“.

In the text of the Maxim Gorky Theatre in Berlin for „BANDERA“, it is quasi-stated as proof of Bandera’s purity that he is revered in the Ukraine today. That these are fascists and ultra-nationalists who do this, and that they sit in the Ukrainian government, was „probably not thought of“.

It is to be feared that the „Myths of Reality“ series mentioned above is a pure propaganda series. Klaus Lederer has already distinguished himself in the past as a „NATO submarine“ in the last party still partially resisting – The Left – and was, for example, responsible for the erection of the bus monument to the radical Islamist terrorists/combatants deployed by the West, Saudi Arabia and other states in the Syrian war at the Brandenburg Gate.

Who wants to inform himself about the fascist Bandera – actually a „Ukrainian Hitler“ – and his misdeeds, should do this best with the help of publications published before 2014. Unfortunately, Wikipedia has not been used for politically relevant articles for quite some time anyway due to the massive „pro-Western“ propaganda content. The German edition of Le Monde diplomatique published an article in 2007 under the title „Kollaboration mit den NS-Besatzern“ in which Bandera and his OUN play a leading role (15). The article states, for example:

„In 1940, the movement split. The radical nationalist Stepan Bandera founded the sharply anti-Semitic OUN-B („banderowzi“), from whose ranks the volunteers were already recruited in 1940/41 for two Ukrainian Wehrmacht battalions („Nachtigall“ and „Roland“). After the German attack on the Soviet Union, on 22 June 1941, Banderas OUN-B participated in numerous pogroms in Ukraine.

In Berlin, the initial intention was to have the „Jewish Bolshevists“ killed in „spontaneous“ actions by local nationalists. At the end of July 1941, the pogrom in Lvov (Lviv), which lasted several days, was given the code name „Petlyura Days“ (after a Ukrainian nationalist).“

Hartmut Barth-Engelbarth writes in his contribution „Ukrainian fascists as heroes in the Gorky Theatre, the Liebich“ to the Nazi play (16):

„You don’t have to see the „play“ to know that it is one of a long series of open attempts to reverse the results of the victory over Hitler’s fascism. The short announcement text already says it all: The war of the Ukrainian putsch junta and their Nazi associations against their own people, which was carried through by fascists, is called „Russian-Ukrainian war“ there. This is already the propaganda language of the Ukrainian fascists and their friends – not least in the Green Party and its Heinrich Böll Foundation, supported by NATO and the EU and their main powers. It also suggests that the context of Bandera-Hitler fascism is a „myth“ (of Russian television…). It is solid historical knowledge that the bandits and their successors today are fascists and Nazi collaborators. Who classifies this in the realm of the „myths“, pursues relativization up to arbitrariness, in order to deprive the anti-fascist fight of the ground.“

In his article, Barth-Engelbarth also reports on a BBC documentary on the cooperation between Ukrainian fascists and German Nazis during the Second World War. A quote:

„The film lets eyewitnesses (survivors of the massacre) tell what happened then … the village was shot at with grenades … 850 people who had fled to the church were locked up, then the building was set on fire … a woman’s intestines were ripped out … a newborn baby was thrown against a wall, a pregnant woman shot in the stomach … (I have seen photos that turn your stomach.)

But even this hideous massacre was surpassed in cruelty when the SS in Kiev murdered more than 30,000 Jews within 36 hours … in Babi Yar … or during the ethnic „cleansings“ in Volhynia, where 40-60,000 Poles were slaughtered … and another 30,000 in Galicia (by the fanatical Ukrainian nationalists of the OUN-B and the UPA respectively) …“.

Nowadays also in Germany fascists are again recruited for the fight against the Russians: Numerous blogs, magazines, activists and anti-Nazi initiatives reported with reference to corresponding publications including flyers of the right-wing extremist Azov battalion that this battalion under the Ukrainian Ministry of the Interior wanted to recruit Nazis as fighters at the festival (18-26). According to Ukrainian data, more than 1000 fighters from all over Europe are to serve in the „volunteer battalions“, most of them in the Azov battalion. Der Spiegel speaks of 2500 Euro-Nazis (11). Even Russian neo-Nazis are among these fighters. The fact that the hotly discussed concert event in Themar was a Nazi festival may also have become clear to the last one at the latest with the pictures of the masses performing Hitler’s salute during a concert. 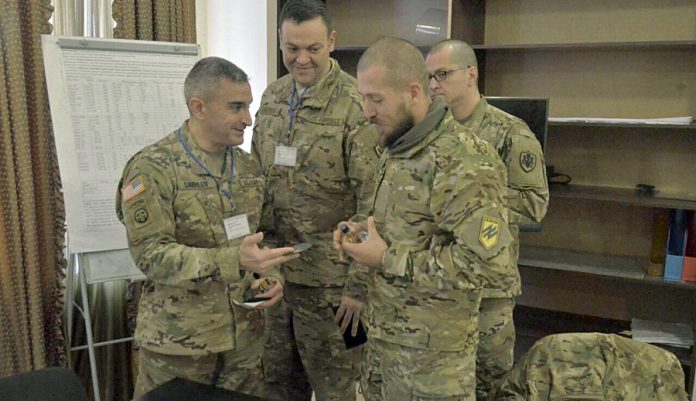 This english version is an automatic translation with the DeepL translator.