The alleged poison gas attack in Douma (Ghouta, nearby Damascus) is a false flag of the western funded propaganda organisation White Helmets and the Jaish al-Islam terrorists who where the last „rebels“ in Douma. The aim was to bomb Syria. Videos and photos of the terrorists unintentionally prove this further White Helmets fake. 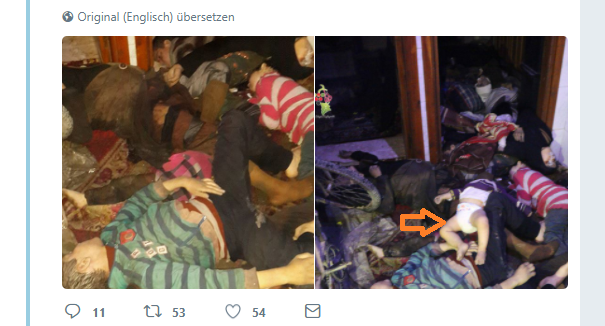 Two images found on Twitter and published by Jaish al-Islam and the White Helmets show the same situation: (potentially) dead children and women after the alleged chemical attack in Douma. But these pictures are different. One can clearly see that the whole situation was staged: For the picture on the right side, they added a baby to the scene. Maybe that’s better for propaganda? But one should not publish two versions if he wants to be considered reputable. Bad mistake.

Two more images – screenshots from Youtube videos – also show the same scene in different versions. For example in the image on the left side here above, they added two more kids to the scene. These kids are not in the right picture. Furthermore other details are different.

So we have many different versions of one scene and clearly not a real unstaged image of people after a poison gas attack in Syria. It seems as if the also technically bad work of the White Helmets and their terrorist buddies is not getting better even though they had some years to practise. Real bad propaganda material, proving the alleged Douma chemical attack was staged by our propaganda units of the White Helmets.