British Airways confirms the death of four pilots, but sees no connection to their „Corona vaccination“.

„Sadly four members of our pilot community passed away recently. Out thoughts are with their family and friends. However, there is no truth whatsoever in the claims on social media speculating that the four deaths are linked. Julie“

What is particularly explosive in this context is that pilots are regularly given complete medical check-ups and have no pre-existing illnesses that could be held responsible for their death. They have to be in perfect health to be allowed to do their job.

British Airways employs about a thousand times that number of pilots, 4300 as of June 2020, according to the Frankfurter Allgemeine Zeitung (2). This pilot death rate after a Corona vaccination of about 1:1000 corresponds astonishingly quite exactly to the prognosis of the immunologist and toxicologist Prof. Dr. Stefan Hockertz, who had already warned in mid-2020 of possibly 80000 deaths after the Corona „vaccination“ in Germany – with a population of over 80 million people (3).

The British pilot death rate seems all the more dramatic because the victims are perfectly healthy, regularly examined people in their prime, which is of course not the case with the total population of a country. Added to this are the possible long-term consequences of the „vaccinations“, which cannot even be taken into account here.

The Twitter message of the airline British Airways has disappeared in the meantime, but can currently still be found via web.archive.org or by entering the text via Google search (1): 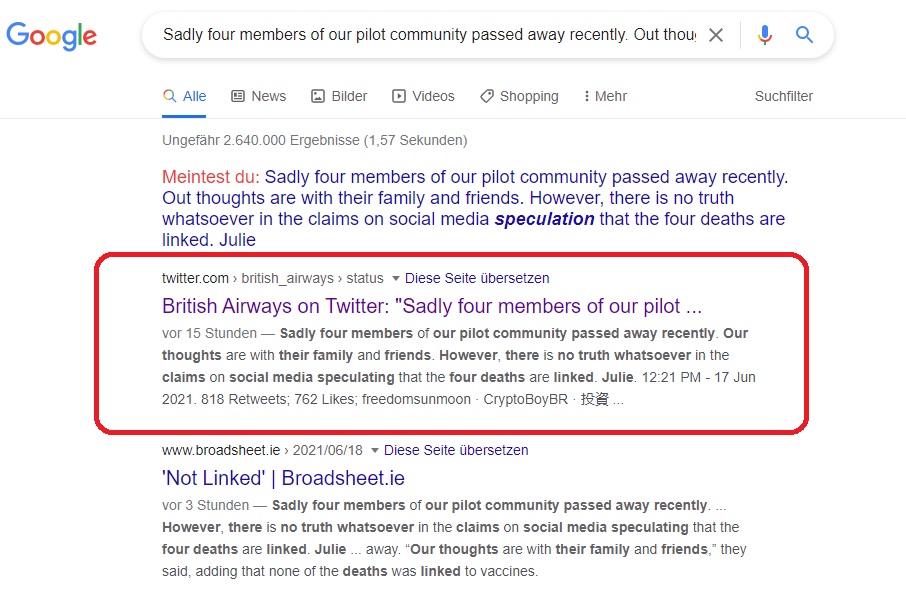