The WHO has published official recommendations on DNA manipulation of humans.

Those who warned that Corona „vaccinations“ were the first step towards the genetic manipulation of humans faced harsh attacks from quality media, politicians and activists who denied this and ridiculed the corresponding fears. But all that is now moot: on 12 July 2021, the WHO itself let the cat out of the bag and published recommendations – available to everyone on the WHO website – on the genetic manipulation of humans „to promote public health“ (1). 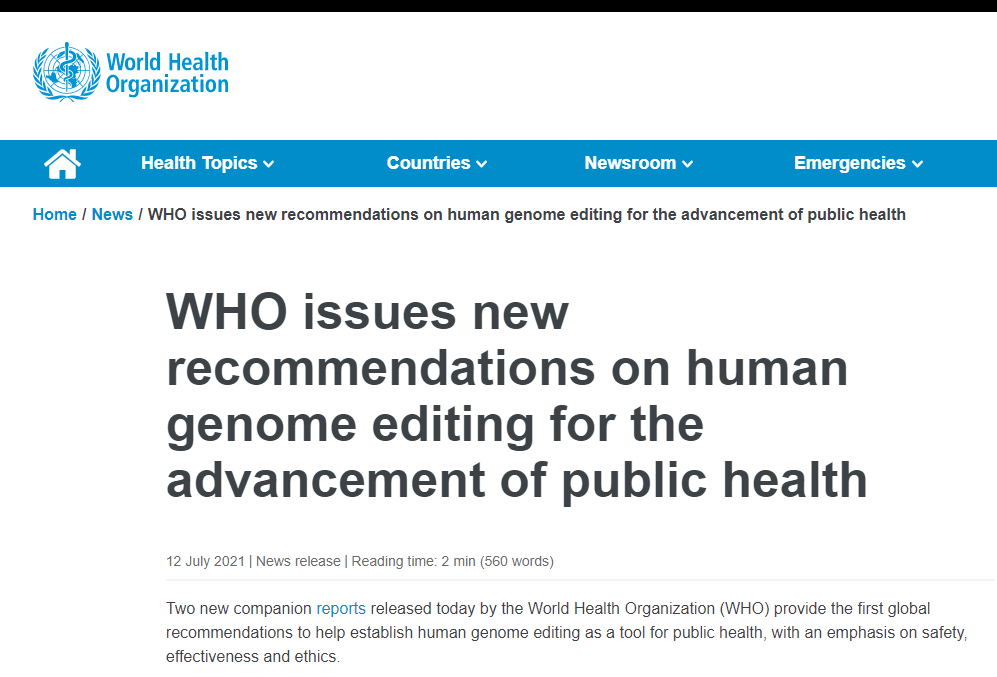 The World Health Organisation, about which one could read in the media before the Corona crisis sentences such as „The WHO is itself on the Gates Foundation’s money drip“, writes in its news article „WHO issues new recommendations on human genome editing for the promotion of public health“ on the modification or manipulation of the human genome (1-3):

„Two new companion reports released today by the World Health Organization (WHO) provide the first global recommendations to help establish human genome editing as a tool for public health, with an emphasis on safety, effectiveness and ethics.

The forward-looking new reports result from the first broad, global consultation looking at somatic, germline and heritable human genome editing. The consultation, which spanned over two years, involved hundreds of participants representing diverse perspectives from around the world, including scientists and researchers, patient groups, faith leaders and indigenous peoples.

‚Human genome editing has the potential to advance our ability to treat and cure disease, but the full impact will only be realized if we deploy it for the benefit of all people, instead of fueling more health inequity between and within countries,‘ said Dr Tedros Adhanom Ghebreyesus, WHO Director-General.“

It is therefore a „good thing“ that since its last amendment, the genetic engineering law in Germany no longer includes all living beings as before, but now „all living beings except humans“.

The WHO, on the other hand, is apparently rock-solid in its assumption that „its recommendations“ on DNA manipulation will be implemented worldwide, although the population does not yet know anything about it. This is what the above-mentioned communication of the World Health Organisation says:

„The recommendations focus on systems-level improvements needed to build capacity in all countries to ensure that human genome editing is used safely, effectively, and ethically.“