The official presentation of the alleged terrorist attack on the Pentagon turns out to be a bizarre deception that violates the laws of physics.

According to the U.S. government’s presentation, on September 11, 2001, a Boeing 757-223 airliner – American Airlines Flight 77 – hijacked by al-Qaeda terrorists flew at high speed at low altitude into the U.S. Department of Defense – „Pentagon“ – in Arlington near Washington. All 64 people on board and 125 people on the ground are said to have died.

Images: Left: Alleged Boeing 757 crash site at the Pentagon. US Marine Corps, Wikimedia (2). A red circle was added to the original picture in the middle. Right: According to official information a passenger plane is said to have crashed into the Pentagon. US Air Force, Wikipedia (3).

Just one look at the supposed impact point of the plane shows that no passenger plane of about 50 meters length with a wingspan of 38 meters and a weight of more than 100000 kilograms including tens of thousands of liters of fuel – the flight was supposed to go to Los Angeles – hit here. The photo above right shows this location during the recovery work. The actual point of impact is at the collapse site of the debris on the lower left. The rest – the ceiling, so to speak – fell down on it some time after the impact.

If such a large aircraft hits a building at almost 1000 km/h and thus with high kinetic energy, we would have to deal with much greater damage, widely scattered aircraft debris, etc., not to mention the alleged flying, practically and technically impossible feat of an al-Qaeda terrorist with a few hours of flight time to park the aircraft on the first floor. Why the energy of the crashing plane should have dissipated and only damaged the outer ring of the building remains a great mystery to every believer in the official 9/11 theory.

The Pentagon photo at the top left shows the supposed point of impact of the Boeing itself. The photo shows the situation before the buildings above it collapsed. Such photos are hard to find, and in the media one usually searches rather unsuccessfully. This one, like the other pictures taken by employees of the US government, is public domain, and can be found rather hidden in the net.

The picture with the impact point before the collapse also clearly shows that no Boeing 757 with a wingspan of 38 meters was struck here at over 900 km/h. There is no doubt that the hole is much too small and there is no aircraft debris to be seen. Actually „nothing more should be standing here“. Of course, one can also calculate this from a physical and scientific point of view, but nobody would expect to have any proof for the official theory of the US government after these calculations.

Image: Detail from original photo: Outside of the Pentagon, shortly after the „impact of the Boeing-757“, situation before the impact. In the building itself, the first floor has not yet burned out as it did later – before the collapse. An impact site is not visible here. US Navy (5).

Whether the actual hole in the mold was caused by an impact at all or whether it was more likely caused by fire or rescue work or at least widened by it, is still a question. Pictures taken directly after the alleged impact raise questions. In a picture of the US Navy – here an enlarged section of the picture – there is no burnt-out first floor yet, but beyond that no impact hole can be seen. The „square hole“, which is shown several times in the text above and further down, cannot be seen on the image detail and it does not look like it is a question of perspective or the poor resolution of the image.

The firefighting foam of the fire department, which can be seen on the later pictures – see the picture series below about the impact hole – also makes it very clear that even the windows directly above the „mini impact point of the Boeing“ are still intact!

The impact hole of the „Boeing 757“ in the Pentagon

Here are some more pictures of the 9/11 impact site, before the collapse. These photos were taken by members of US authorities and are therefore public domain under US law. In the media, they usually do not make it into the media, but the authorities remain firm in their statement that a plane crashed here. The „impact hole“ presents itself as an area where a piece of wall between two floors and walls was destroyed and looks very square. 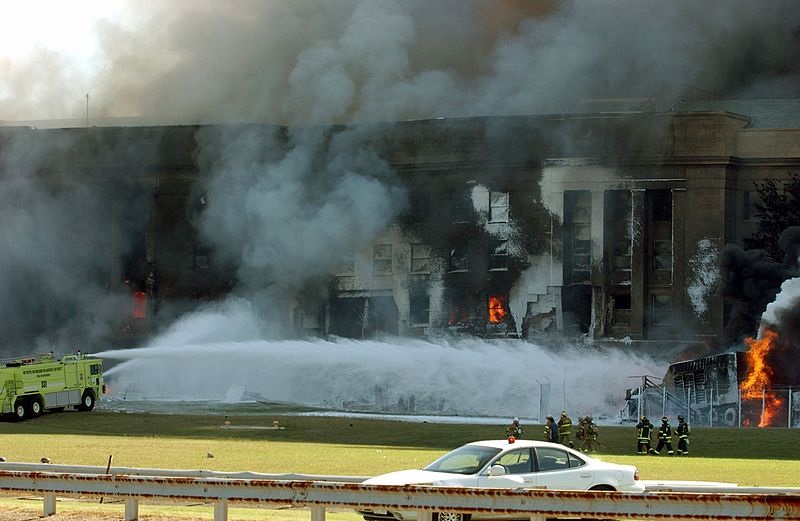 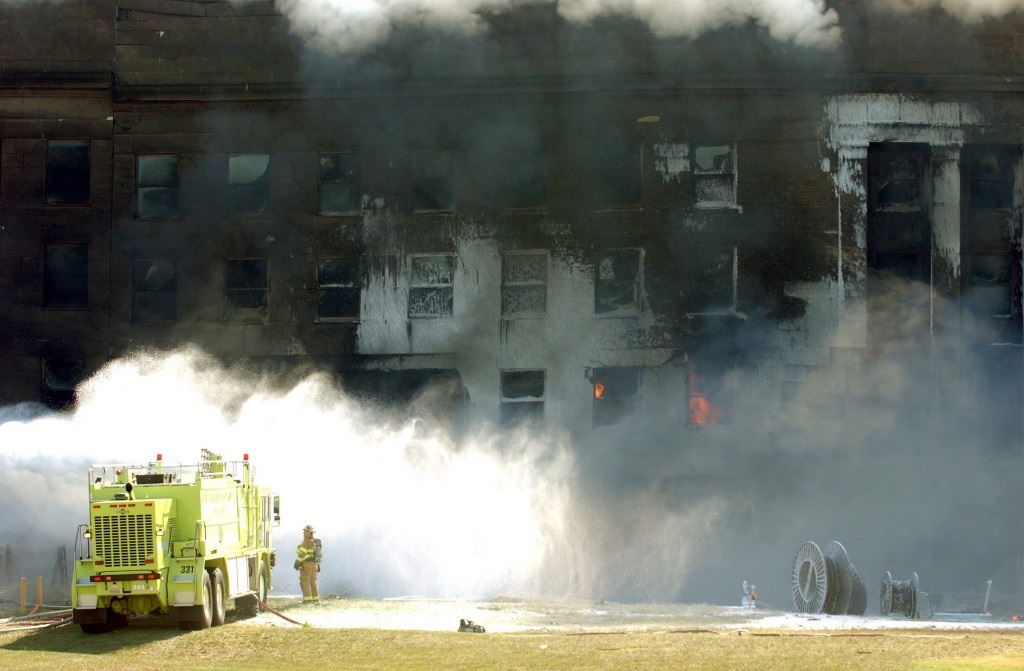 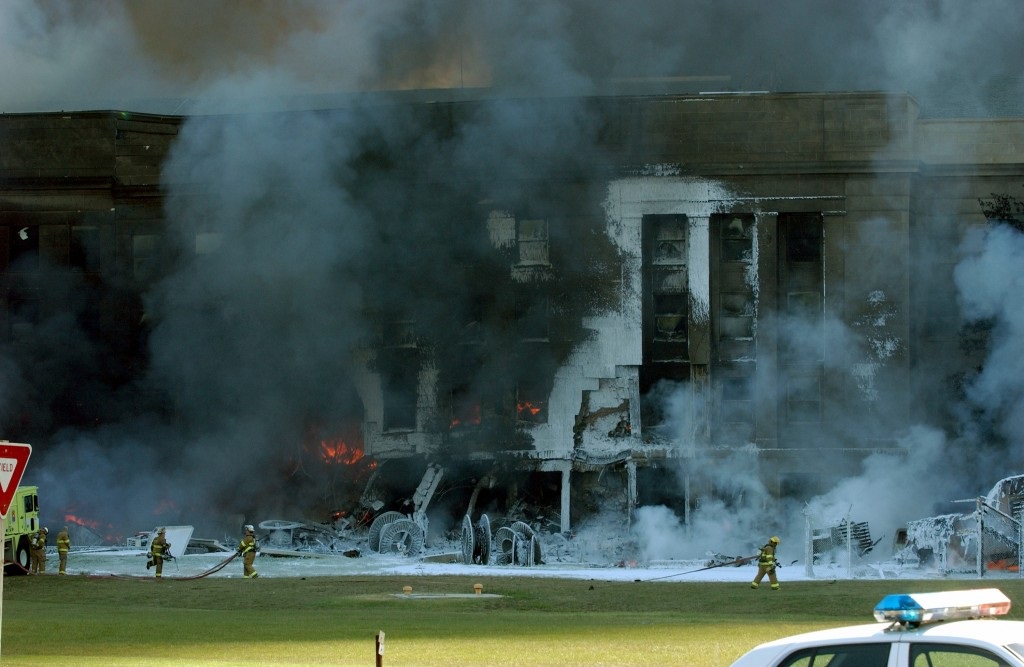 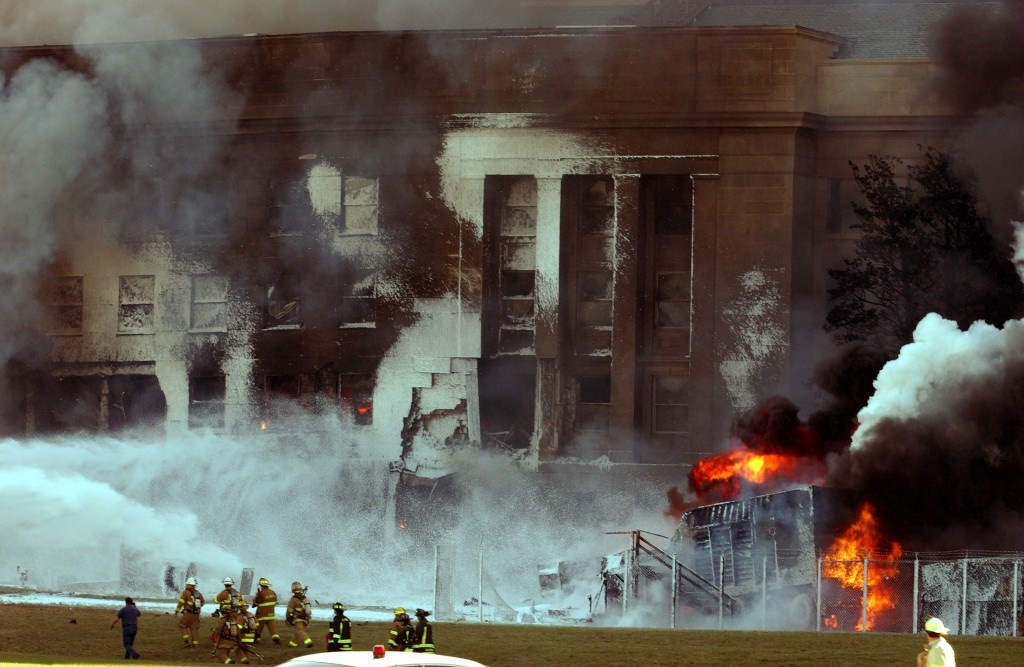 What to do when the world war of terror is about to break out, when the skyscrapers in New York are under attack and dozens or even hundreds of dead and injured are supposed to be found at the site of the terrorist attack? First of all form small groups and have a chat (10)? 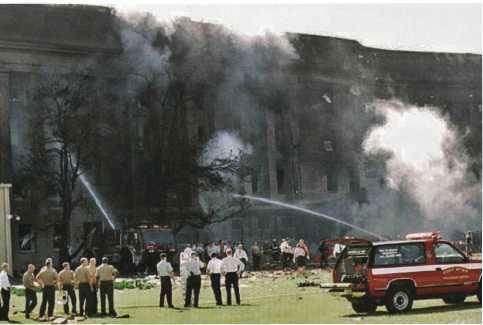 Image: Outside of the Pentagon, shortly after the „impact of the Boeing-757“, situation before the impact site. In the building itself, the first floor is not yet burned out as it was later. An impact site is not visible here. US Navy (5).

According to official figures, 125 people died in the „impact of the Boeing 757“ on the ground in and around the Pentagon alone. But in front of the building, directly in the non-existent airplane debris field, the Pentagon employees stand around calmly immediately after the attack, as if they were in an evacuation exercise.

There is rather little to see of rescue operations and the fire department sprays a little around. What about all the injured and seriously injured that should be there? It doesn’t look like the real thing after a horror crash, hellish flames, dying colleagues and the catastrophe of the century.

Since the frontal approach to the Pentagon building in the area of the alleged catastrophe site is not possible for an airplane in low-level flight – because it is obstructed there – one had to come up with something regarding the alleged approach route of the airplane and published the picture below, which shows the official approach route of the Boeing-757: diagonally into the building, just past the generator, which is located next to the construction containers. 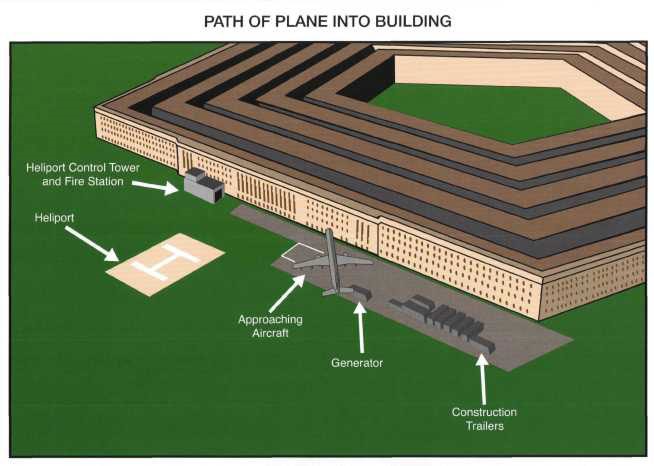 Image: Official approach of the Boeing aircraft to the Pentagon at 9/11. US Navy (11).

Of course, this does not stand up to a comparison with reality – see also the screenshot from an MSNBC video of September 11 below. In the MSNBC video, the upper part of the building has already collapsed, so the „Boeing impact point“ can be located well in the middle of the picture. By the way, the plane is „naturally“ shown too small in the official graphic. 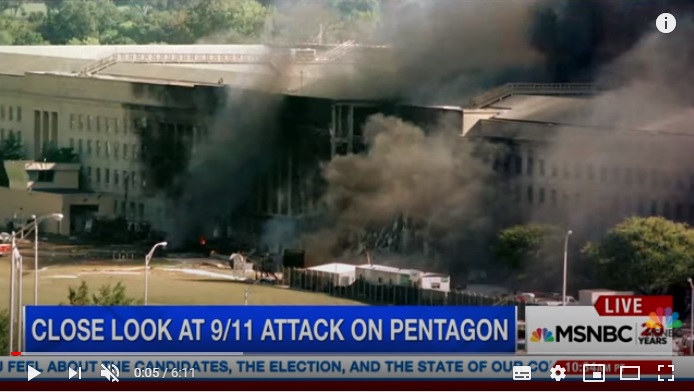 Image: Close-up of the Pentagon impact site after the collapse of the upper floors, the latter center can be seen well above. Screenshot from MSNBC video, Youtube (12).

The question also arises – if one takes the official theory of the slanted bird seriously – why the damage from the impact does not run diagonally into the building, but enters the building frontally at the point of debris.

We have long since established that no large passenger plane was struck at the alleged Boeing 757 attack site at and in the Pentagon. But the false flag slapstick parade is not over yet. A nice picture with another alleged impact hole, which however contradicts the „weird bird“, is provided by the US Department of Defense itself: 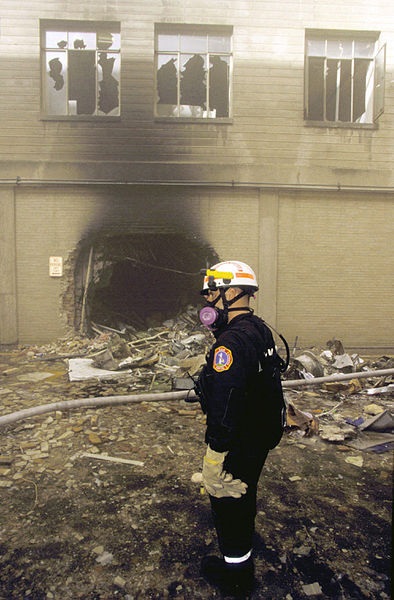 Image: Another hole in the wall, allegedly caused by a landing gear of an airplane. Wikimedia, US Department of Defense (13).

The hole in this photo is said to have been caused by the impact of a landing gear – wheels and attached equipment – of the aircraft. In other words, according to the official theory, the landing gear came off at exactly the right angle fractions of a second before hitting the plane flying at an angle to the Pentagon out of the blue and then went straight into the wall.

Although the landing gear had the same speed and direction of movement as the rest of the plane, it actually managed to take off on its own trajectory and, in a kind of divine act of will, to smash into the wall at a precise 90-degree angle to the outer wall of the Pentagon. And, of course, with a beautiful symmetry: the hole is exactly in the middle between two walls that probably border a room.

It is fantastic that a small, lonely landing gear can accomplish such a feat, the effects of which, at first glance, look to the viewer as if someone had previously placed a bomb or a tracking device for a rocket on a table in the middle of the room behind the wall.

If you want to refute a theory scientifically, it is enough to show that a part of the theory is wrong. That the official theory about the terror attacks of September 11, 2001 in the USA is not true can be shown by the discovery of the Arlington Pentagon 9/11 fake alone.

The fact that only this one location of a 9-11 attack is discussed here in this article does of course not mean that everything is „right“ or better staged at the other 9-11 locations. Here, too, there are hair-raising mistakes by the conspirators.

In the alleged crash in Shanksville, there is also no airplane to be seen, and that the three collapsed WTC towers in New York, which were hit by two airplanes, fell down with a lot of help in the form of explosions, is not only seen relatively easy by an amateur, it has meanwhile also been recalculated and confirmed by some upright scientists (14-25). Nevertheless, of course the discovery of the faked Pentagon attack alone would be enough to bring down the official theory of 9/11. This is called „science“. 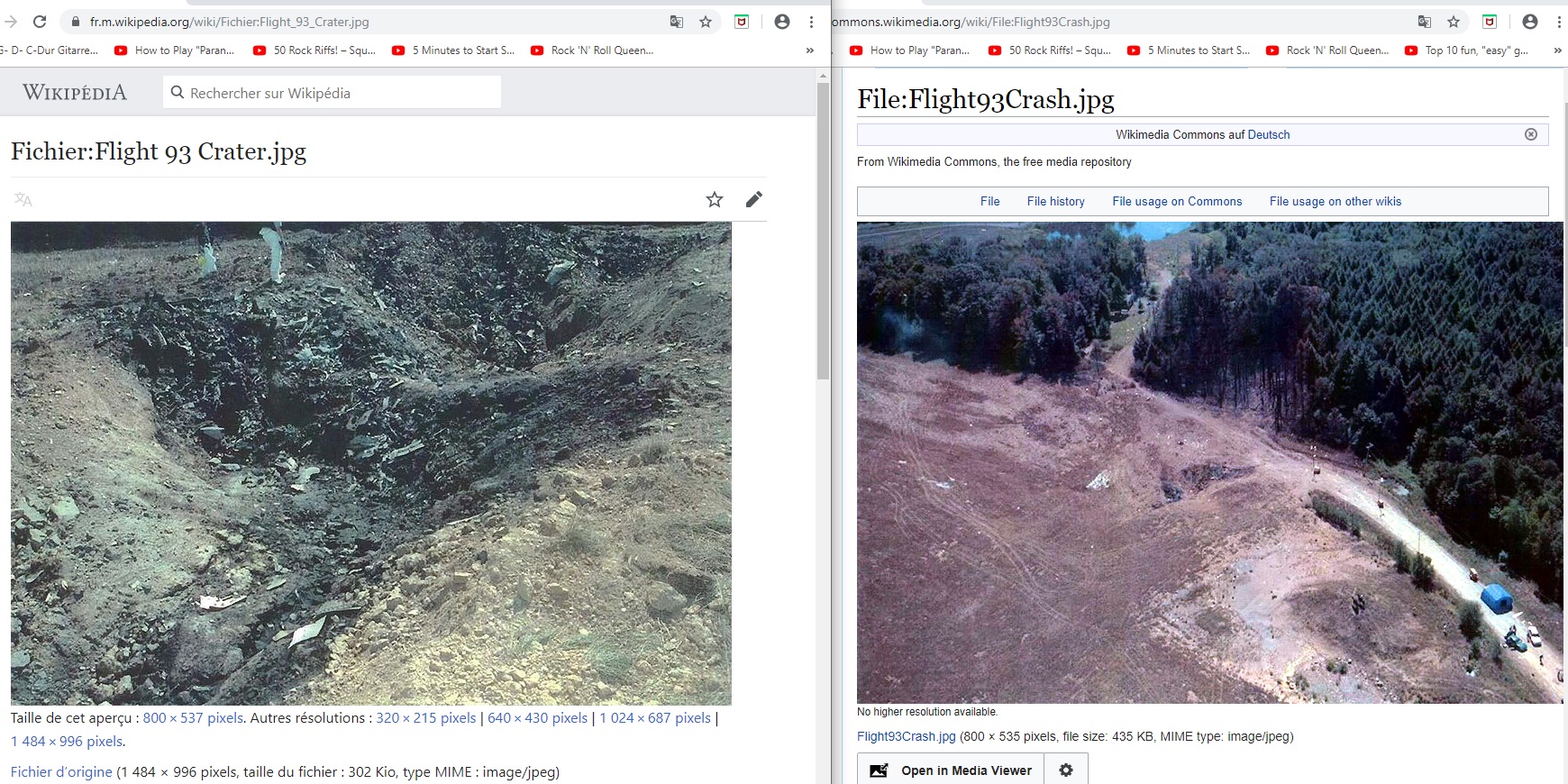 Image: Another 9/11 hole, much too small. The official crash site of the Boeing-757 of United Airlines Flight 93 on September 11, 2001 near Shanksville, Pennsylvania. On the left side the hole and two people on the left side, on the right side the same hole in the meadow from further away including vehicles on the right side of the picture. US government, Wikipedia (26) and Wikimedia (27).

9/11 served the USA to launch the „war on terror“ and, in connection with this, to establish extensive surveillance and censorship measures as well as numerous wars and interventions below the military threshold that violated international law. To this day, „September 11“ is still being misused as a justification for numerous illegal actions in the USA and around the world.